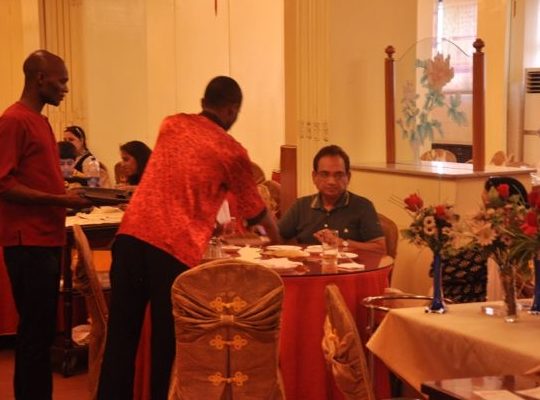 Our Correspondent who visited the restaurant on Tuesday morning reported that he was accosted at the gate by a security guard wearing Army combat camouflage and prevented him from entering the restaurant.

He did claim, however, that the Shi Shi Chinese Restaurant was open to the public. When asked if Nigerians were allowed to patronise Shi Shi, Adegbite said, “Not really.” He then went on to make clarifications.According to him, there are two sections in the restaurant — a regular one and one that is strictly for Chinese. Adegbite said, “I want to debunk all the allegations. The restaurant is open to everyone. But you know, Chinese restaurant is not for every Tom, Dick and Harry. Nobody can just enter.

“Come, and I will conduct you round the restaurant. I’m a Nigerian and how can I prevent my fellow people from entering in? But, of course, it’s for gentlemen, not for everyone.” When asked how the restaurant defines a gentleman, Adegbite said, “The restaurant is divided into two sections. There is one open to the public and there is one called Hot Spot. “The Hot Spot is where you enter and cook on your own. All the ingredients are made available. But it’s only for Chinese nationals.

“Maybe it’s this one that some people tried entering and were disallowed and is now causing the outcry.” Our Correspondent maintained that he was not allowed to step into the restaurant, as he was turned back at the entrance to the premises. He added that he had only heard of two sections from Mr. Adegbite.